Hurricane Delta escalated quickly into a Category 4 storm and forecasters warn it could strengthen even more before it strikes the Yucatan Peninsula. After that, forecasters expect Delta to emerge over the extremely warm waters of the Gulf of Mexico, where it could maintain its strength for a time.

The hurricane’s winds had increased to 130 mph by 11:20 a.m. EDT Tuesday just over 24 hours after it became the 25th tropical storm of the 2020 Atlantic hurricane season. Delta became the first major hurricane to churn over the Atlantic basin during the month of October since Hurricane Michael in 2018. Delta’s intensification was the most extreme in 15 years for an October hurricane. The storm’s maximum sustained winds increased by a whopping 70 mph – from 40 mph to 110 mph – in its first 24 hours as a named storm. Only Hurricane Wilma in 2005 exploded in a more significant fashion over that same 24-hour period. Delta has also set a speed record for strengthening from a depression to a Category 4 hurricane. Delta accomplished this in just over 36 hours, and surpassed Keith from 2000, which did so in 42 hours.

At 2 p.m. EDT Tuesday, Delta was packing winds of 140 mph and was chugging along west-northwest at 16 mph. The Category 4 hurricane was located about 260 miles east-southeast of Cozumel, Mexico.

Satellite images showed that Delta was an incredibly compact hurricane on Tuesday morning. Hurricane-force winds extended outward only up to 25 miles from the storm’s center, but a small eye about 4 miles across had developed, a sign that forecasters said indicated rapid strengthening.

U.S. officials were already urging Gulf Coast residents to be prepared ahead of the intense hurricane. Louisiana Gov. John Bel Edwards said early Tuesday that Louisianans should have a game plan now as the fourth storm of the season to threaten Louisiana. Delta is expected to make landfall as a major hurricane of at least Category 3 strength over over south-central or southeastern part of the state late Friday or early Saturday, becoming the first-ever hurricane named after a Greek letter to strike the U.S., and the 10th storm of the season to make landfall in the continental U.S. – a new record.

“Now is the time for Louisianans to prepare [for] Hurricane #Delta. This storm will affect Louisiana and everyone needs to prepare accordingly,” Edwards tweeted Tuesday morning.

Alabama Gov. Kay Ivey declared a state of emergency midday Tuesday ahead of the hurricane, noting that coastal areas of the state are still recovering from Sally’s blow in mid-September. Hurricane Delta “could potentially have a significant impact” on Alabama, she tweeted.

It’s possible that Delta could peak as a Category 5 hurricane with sustained winds exceeding 155 mph. If the storm were to reach that strength, it would be the first hurricane this season to reach Category 5 force. Hurricanes Laura and Teddy peaked at Category 4 intensity.

Delta is forecast to take a fairly steady west-northwest path into Thursday, which will take the storm over part of Mexico’s Yucatan Peninsula on Wednesday with dangerous, damaging and perhaps deadly consequences.

From Thursday to Friday, the hurricane is projected to begin a curved path to the north over the west-central Gulf. As the storm approaches the Louisiana coast late Friday it may begin to turn more to the northeast.

“As Delta approaches the central Gulf Coast it will start to encounter the increasing wind shear and slightly cooler water, but the forward speed of Delta and the degree of shear it encounters will determine its wind strength at landfall,” AccuWeather’s top hurricane expert Dan Kottlowski explained.

Wind shear is the increase in wind speed with altitude as well as the sudden change in wind direction from one location to another. Wind shear and changes in the structure of the eye are some of the main challenges in forecasting the overall strength of hurricanes.

Interests along the Louisiana coast should prepare for a direct strike by a major hurricane late Friday or early Saturday, and conditions are expected to deteriorate from Thursday afternoon to Friday afternoon even well ahead of landfall.

“Once Delta reaches major hurricane strength the wind field developing around it will remain very strong. Regardless of a loss in wind intensity near the core, surge and wind impacts will still be potentially devastating along and near where the hurricane makes landfall along the central Gulf coast from late Friday to early Saturday,” Kottlowski said.

At midweek, an estimate on the AccuWeather RealImpactT Scale for Hurricanes for the U.S. will be formulated. This scale, developed by AccuWeather, provides a more comprehensive outlook for impacts from tropical storms and hurricanes on land areas than the Saffir-Simpson Hurricane Wind Scale, which is based solely on wind speed.

During Wednesday, Thursday and Friday, winds and seas will build over the Gulf of Mexico, especially in the central part of the Gulf. However, dangerous surf conditions are likely to develop throughout the Gulf of Mexico at midweek and remain dangerous with frequent and strong rip currents from Florida to Louisiana and Texas into the start of the weekend.

Even though the eye containing Delta’s strongest winds may avoid the greatest concentration of petroleum rigs in the western Gulf of Mexico, operations of these rigs may be suspended for a few days. The projected path of Delta and its high winds could impact oil refining operations in portions of southern Louisiana.

Wave action well ahead of the storm will begin to cause overwash and coastal flooding prior to Friday from part of eastern Texas to Florida. Near and just east of where the storm makes landfall, most likely in south-central Louisiana, a major and potentially life-threatening storm surge can occur. Any shift in the storm track could cause the area of greatest storm surge to shift correspondingly.

“It is possible the storm surge could be greater from Delta than from Laura, which was estimated to be 17.5 feet,” Kottlowski added.

According to KFDM’s meteorologist, Greg Bostwick, Delta continues to intensify and will become a major hurricane this morning as it moves to the west-northwest at about 15 mph. This motion will bring it across the northeastern tip of the Yucatan Peninsula early tomorrow and into the southern Gulf. By Thursday, a ridge of high pressure to the north and northeast of Delta should weaken which will allow the hurricane to turn more to the north.

Landfall looks likely southwest of New Orleans late Friday into early Saturday. Weakening is likely before landfall due to cooler water temperatures and increasing wind shear. However, Delta should make landfall as at least a CAT1 hurricane.
Locally, any significant weather should stay to our east with some gusty winds of 20-30 mph possible Friday along with a few light showers. Tides will be running higher by late in the week but should stay below the levels experienced during Beta a few weeks ago.

Entergy Texas, Inc. is continuing to monitor and plan for any potential impacts from Tropical Storm Beta. The National Weather Service has issued a Tropical Storm Warning for parts of the Gulf Coast and anticipates the storm may produce strong winds, heavy rains and flash flooding across Southeast Texas.

Entergy Texas crews are prepared to safely restore service to customers as quickly as possible when conditions permit. With the potential for flooding, restoration times could be extended in some areas, where flooding makes it difficult to move crews and access our facilities. In addition to bringing in additional crews, Entergy Texas has also mobilized high water vehicles and other equipment to aid in the restoration effort.

“As we continue to monitor Tropical Storm Beta and prepare for its impacts to Southeast Texas, we encourage our customers to do the same,” said Allen East, vice president of distribution operations for Entergy Texas. “Given the uncertainty and slow track of the storm, our region could start seeing impacts from Beta as early as this evening, and customers should be prepared for severe weather including flooding through the middle part of next week.”

Although power has been restored to all customers in Texas following Hurricane Laura, crews continue to repair damage to the region’s transmission system. While these transmission structures are being repaired, Entergy Texas’ engineering and operations groups are working to ensure the safe and stable operation of the electric grid.

Download the Entergy App at entergyapp.com. Customers can use the app to report outages or check on the status of power at their home or business.

Entergy’s View Outages website includes maps that show where outages are located and give information about restoration progress.

Greg Bostwick, Chief Meteorologist at KFDM-TV, reports that Beta remains weak and continues to move toward the Texas coast. Landfall is expected well to our southwest later today between Port Lavaca and Corpus Christi. After landfall, Beta should drift over South Texas tonight into Tuesday before ejecting out to the northeast Wednesday into Thursday.

Locally, periods of rain will continue into Wednesday. However, no flooding is expected with rainfall amounts of no more than 4-7 inches between now and Wednesday night. Occasional wind gusts to 30-40 mph will be possible near the coast mainly today.

Tropical Storm Laura is expected to strengthen into a Category 3 hurricane Wednesday over the Gulf of Mexico, forecasters said Tuesday morning.

The storm strengthened overnight and was near hurricane strength as of 7 a.m., the National Hurricane Center said. Laura is expected to make landfall late Wednesday or early Thursday around the Louisiana/Texas state line.

Portions of Louisiana are under a hurricane watch and a tropical storm watch related to Laura. A dangerous storm surge is expected – up to 11 feet in some places – along with strong winds and rain. 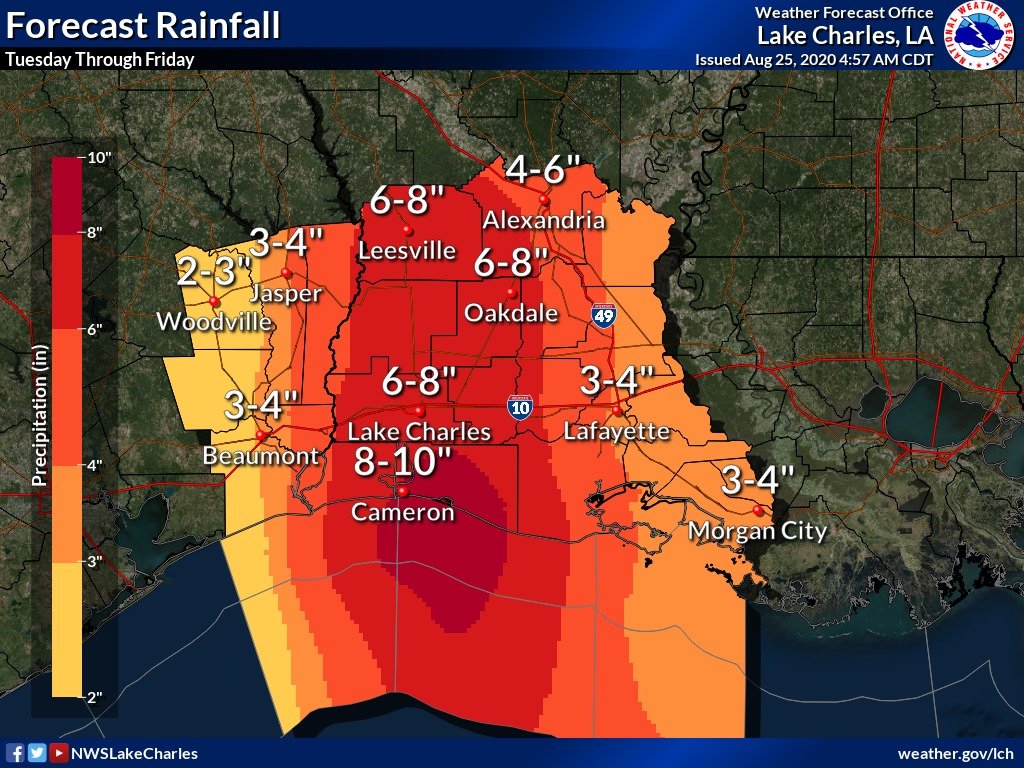 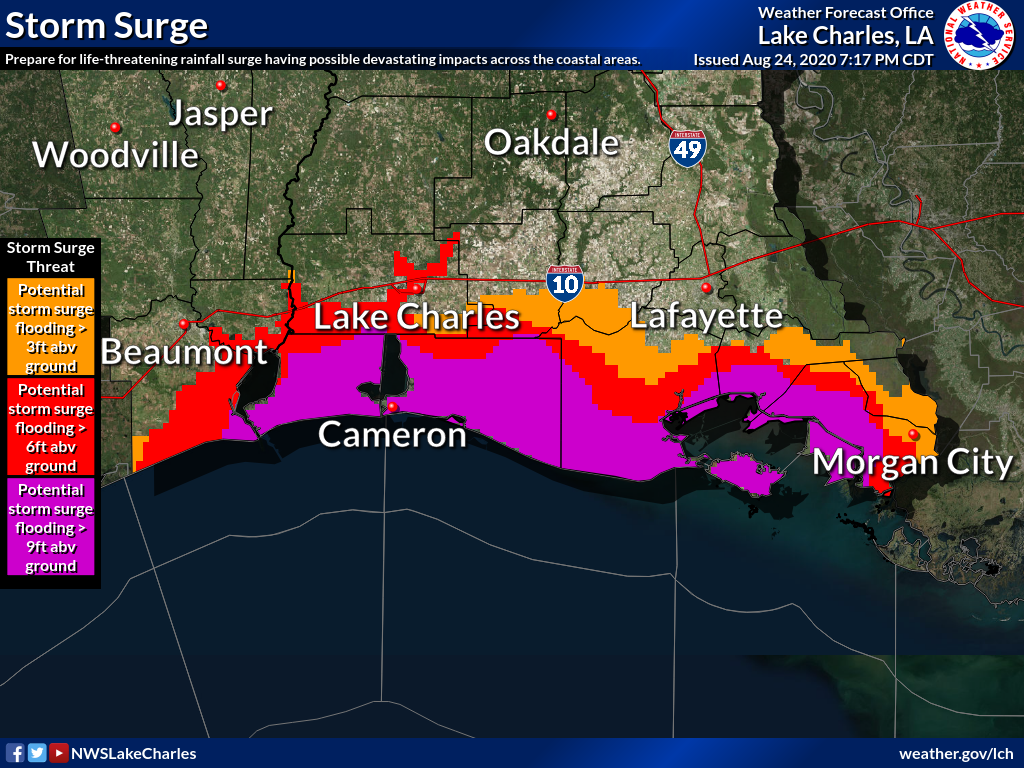