It will be a drive-through testing site and you do not need an appointment to receive the testing. 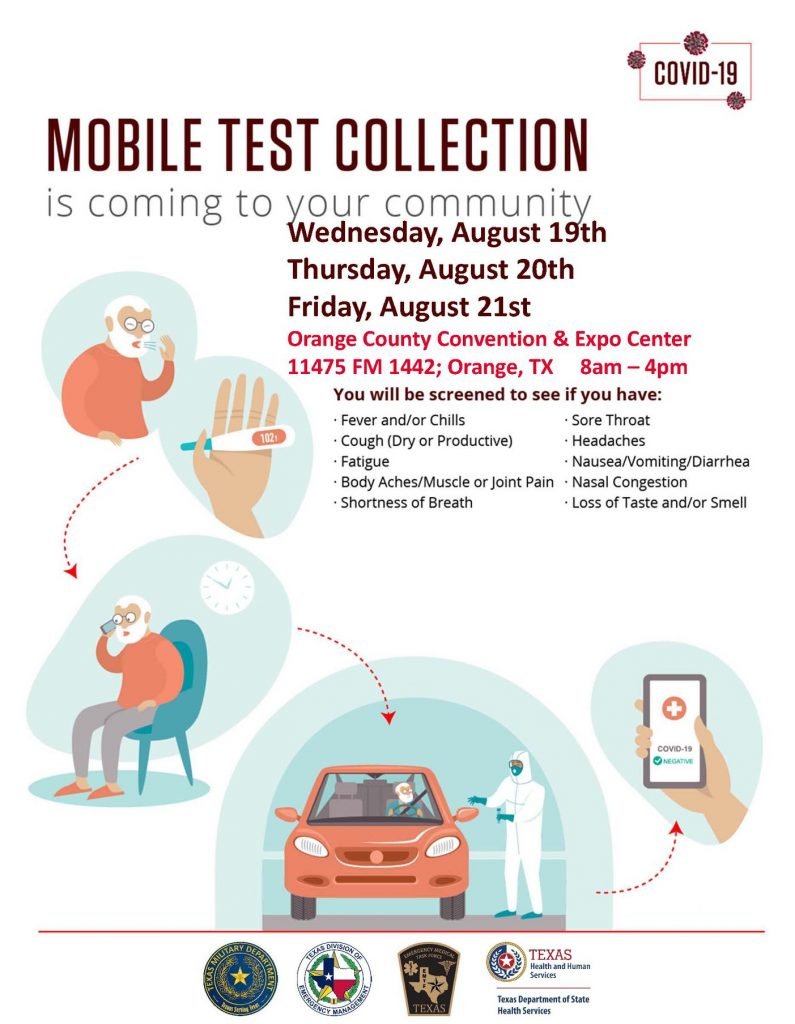 The Orange County Environmental Health and Code Compliance Department is requesting the public’s help to let them know how they are doing and learn where they need improvement.

The mission of the Environmental Health and Code Compliance Department is to help protect the citizens and visitors of Orange County through permitting and inspection of retail food service establishments, regulation and permitting of on-site sewage facilities, investigating environmental violations and enforcement and permitting of the National Flood Insurance Program (NFIP) Floodplain Regulations. They will make every effort to ensure Orange County citizens receive information and services that protect the health, safety, and well-being and provide good stewardship of public resources.

This involves investigating all complaints, issuing permits along with advising contractors, property owners, and foodservice owners on steps they will need to take to comply with current applicable laws and regulations.

The 9-question survey can be completed here.

Pinehurst Interim City Administrator Jerry Hood released a statement in reference to the recent walk-out of the entire Pinehurst Volunteer Fire Department. In an effort to clear the air and dispel false information given out by former Fire Chief Shon Branham, Hood released the following:

“I am both disappointed and disheartened in the blatantly false information former Pinehurst Volunteer Fire Department Chief Shon Branham has been relaying to the media, and more importantly, the citizens of Pinehurst. Additionally, I would like to ensure the Citizens of Pinehurst that at no time was there a stoppage or denial for fire and medical services. The City of Orange Fire Department is currently providing fire services for the City of Pinehurst. Medical services have been and will continue to be provided by Acadian Ambulance Services.

“During the spike of Covid-19 in Orange County and across the nation, it was suggested by Chief of Police and Emergency Management Coordinator Fred R. Hanauer III that the fire department should limit their responses to only life or death emergencies as not to expose the firefighters and public to undue exposure to the virus. Chief Branham chose not to honor that request citing that he had no choice but to respond to these calls due to an agreement with Acadian Ambulance Service. Upon meeting with Acadian Ambulance officials it was determined that this was not the case and that there was no such agreement in place. Furthermore, Acadian officials advised that the fire chief determines which calls they choose to respond to and that it is not dictated by them. It is the practice of Acadian Ambulance Services to notify all local jurisdictions any time they are responding to a medical call in the various jurisdictions.

“It was learned that former Chief Shon Branham had instructed their dispatch service to dispatch them to all calls Acadian was responding to regardless of nature. A follow-up into this situation revealed that although Pinehurst is listed as a first responder organization with the Texas Department of State Health Services, there are only 2 current members of the Pinehurst Fire department listed as first responders who hold a basic EMT (Emergency Medical Technician) or above. A third party listed has an expired EMT certification and another listed is no longer a Pinehurst volunteer.

“Former Chief Branham does NOT hold the necessary certifications to provide life-saving care for all medical calls that he requested to respond to. Most first responders who did not possess the proper certification and who have no formal medical training, with the exception of CPR certification, were running emergency traffic (Lights and sirens) to medical calls often arriving minutes after Acadian Ambulance was on scene. Some of these responded to nursing homes and medical clinics where trained medical staff was already on scene and AFTER they were canceled by the ambulance service.

“A recent agreement with the Bridge City Fire Department to provide dispatch services was based on the number of responses formulated on a 3-year average. Naturally, stopping unnecessary calls for service would eventually curtail the cost; however, cost savings was never put in front of human life. Once facts were learned, the Administration wanted to ensure that the services to the citizens are done so above board and with the best efficiency and effectiveness possible. Branham was entrusted by the council to provide these services and they depended on him to make decisions that were in the best interest of our citizens. Having unqualified, non-medically trained personnel responding to calls throughout the city is not only a liability when they respond ‘hands on’ with these patients, but causes undue danger when driving with emergency lights and sirens activated, exceeding the speed limit and at time disregarding traffic control devices.

“On Monday, July 27th, less than 8 hours before the staged ‘walk-out’ by Shon Branham and the fire department, I telephoned Branham to set up a meeting between him and city officials to come to a compromise as to the types of calls they would be allowed to respond to and the minimum training and certifications responders must possess. I gave Chief Branham multiple dates and times to meet, with an attempt to be flexible for all attendees. After exhausting all efforts to meet with Chief Branham, he refused to agree to meet on the dates and times given and decided to walk out on the City of Pinehurst. Chief Branham failed to contact the City of the walkout. During the upcoming meeting with Chief Branham, it was to be advised that only medically trained personnel listed on the Texas Department of State Health Services First Responder Organization website with current certifications would be allowed to respond to calls with Acadian Ambulance. This is at the advice of City Attorney Tommy Gunn and doing anything less would be irresponsible to the citizens of Pinehurst.

“I find it very concerning that former Chief Branham claimed to have the best interest of the citizens at heart but then compelled his entire department to walk out on those very citizens he took an oath to protect. The City of Pinehurst sought only to reach an agreement with the fire department that would be in the best interest of all involved, concentrating first on the needs of its citizens.
The Elected officials and the Administration will work aggressively to rebuild our Volunteer Fire Department and continue to provide the care that our citizens deserve.”

Mr. Hood would like to thank everyone for the outpouring of support by those wishing to join the fire department and encourages anyone interested to pick up an application.

Pinehurst Volunteer Fire Department Chief Shon Branham released the news that the entire department has resigned, including himself and eight volunteers, effective at 6:30 p.m. Monday, because of issues with city administrators. “We have issues,” said Branham. “We want to work them out.”

Branham reports new policies and procedures were put in place on July 1 that impact the ability of the firefighters to do their jobs. He says they’re now limited in the types of emergency calls they can respond to, other than fires. “We don’t need any interference,” said Branham. “We do this 365 days a year free of charge. We want respect.”

In an effort to save money, the city of Pinehurst no longer wants firefighters to respond to most medical calls, as well as shootings and stabbings. Branton added, “In our view, as first responders, breathing problems, chest pains, childbirth, choking, falls, diabetics, seizures, strokes, unresponsive persons, and unconsciousness are calls we feel necessary that a first responder should go to.”

He outlined what firefighters see as the key issues. “We have equipment needs that the city should take care of,” said Branham. “We applied for grants but we’re number 16 on the list. I’m concerned about citizens. They’re having to suffer.”

Under a mutual aid agreement, Orange, West Orange, and Bridge City will handle fire calls in Pinehurst during this time.

FEMA has a message for Texas households impacted by Hurricane Harvey and who may be participating in Group Flood Insurance Policies (GFIP). These three-year policies end Oct. 24, 2020, so policyholders must plan now to switch to a standard flood insurance policy to ensure continuous coverage.

FEMA will accept either a National Flood Insurance Program (NFIP) policy or private insurance to fulfill flood insurance requirements. For more info, call the NFIP Call Center at 1-800-427-4661 or visit https://lnkd.in/edk-sbY to find an insurance agent that sells flood insurance.

Save the Date – Annual Granger 5K