Get ready to rock around the Christmas tree this season as the Lutcher Theater presents “Million Dollar Quartet Christmas!” The heartwarming holiday musical is set to play one night only on November 29, 2022, at 7:30 p.m., as part of a 26-city national touring production. Members of the original Million Dollar Quartet team, Tony-nominated book writer Colin Escott and orchestrator Chuck Mead reunite with director Scott Weinstein for this new musical holiday celebration.

In “Million Dollar Quartet Christmas,” rock `n’ roll newcomers, and soon-to-be legends, Johnny Cash, Jerry Lee Lewis, Carl Perkins, and Elvis Presley come together again to celebrate the holidays. Inspired by the true story of their December 1956 homecoming at Sun Records, this endearing rock n’ roll musical rings with sounds of the season and the chart toppers that made the Million Dollar Quartet famous. The gang is up to their usual antics as we journey through stories of Christmas past, present, and future in a joyful evening filled with nostalgic holiday hits including “Run Rudolph Run,” Jingle Bell Rock,” “I’ll Be Home For Christmas,” and more.

“Get ready to ring in the holidays at the Lutcher Theater, rock ‘n’ roll style, with this fun, upbeat, family-friendly show. There’s going be lots of great music and maybe some dancing in the aisles,” said Lynae Sanford, executive director of the Lutcher Theater. “We are going to pay homage to some of music’s legends during this production.”

Tickets are currently on sale and can be purchased at lutcher.org or by calling the Box Office at 409.886.5535. The Lutcher Theater is located at 707 Main Avenue in Orange, TX.

Mr. and Mrs. Dean Schirmer purchased the dilapidated home in 2010 and have been refurbishing the home since then. The Schirmers restored the home with the intent to keep as much of its originality as possible, and that they did with its beadboard ceilings, shiplap walls, crown molding and so much more.

Presenting the award qre Meritta Kennedy, Sandra Hoke, and Sandra Cash, from KOCB’s Board of Directors.

The Lutcher Theater proudly announces the opening of its 43rd season with R.E.S.P.E.C.T., an electrifying tribute celebrating the legendary Aretha Franklin. This joyous concert event will play for one night only on Saturday, October 22, 2022, at 7:30 p.m. and tickets can be purchased at lutcher.org.

“We are excited to kick off our season with R.E.S.P.E.C.T.,” said Lynae Sanford, executive director of the Lutcher Theater. “This show is sure to have you dancing in the aisles and singing out loud to all of our favorite music from the Queen of Soul!”

R.E.S.P.E.C.T. showcases the soundtrack of an era that brought Franklin worldwide acclaim singing hits such as, “Natural Woman,” “Think,” “I Knew You Were Waiting for Me,” “Chain of Fools,” “Respect,” and many more.

The supreme talent bringing this show to life has been found in New York’s Trejah Bostic, the lead singer of the band, supported by vocalists Meghan Dawson, Nattalyee Randall, and Ashton Weeks, who also serve as the evening’s hosts, and Jasmine Tompkins, the vocalists’understudy.

For more information or to purchase tickets for R.E.S.P.E.C.T., please visit lutcher.org.

The door sign will be a round wooden sign and participants have the option of an initial, word, or name on the sign.  The cost is $25 per person.

Participants will have the option to make a wreath if they would rather do that instead of the sign. 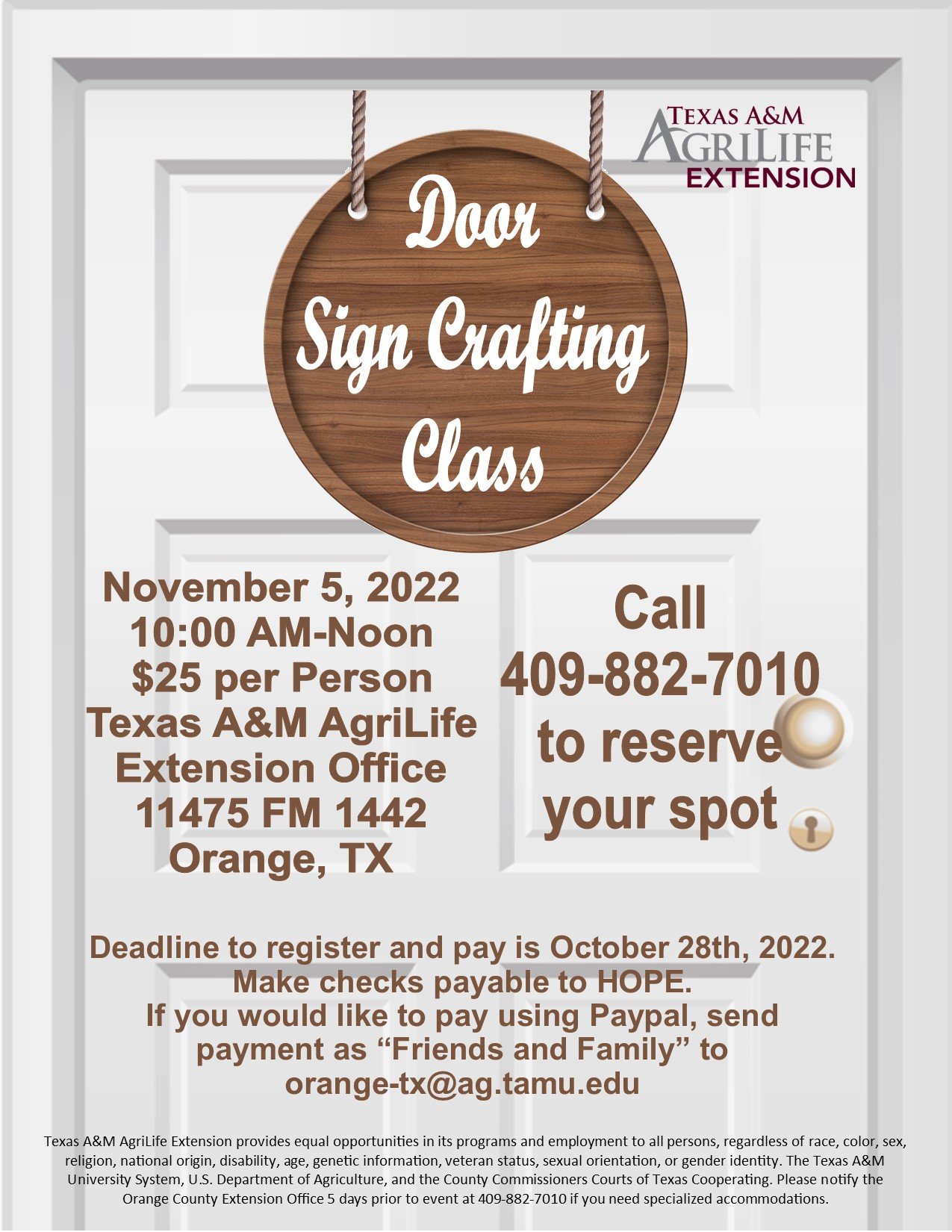 The Lutcher Theater invites individuals interested in getting involved with the arts to attend their annual Service Guild Membership Drive on Tuesday,
October 4, 2022, at 6 p.m. at the Lutcher Theater 3rd Floor Lobby, located at 707 Main Ave. in Orange, Texas. The drive is open to the public and all are invited. Information about committees and membership responsibilities will be presented.

The Lutcher Theater Service Guild is a non-profit organization whose main objective is to support the Lutcher Theater’s performing arts series. Annually the theater provides entertainment to approximately 30,000 adults and children, and the Service Guild helps facilitate Lutcher events in a variety of ways. Additionally, the Service Guild offers an opportunity for fun and engaging social interaction while affording volunteers choices of working when their schedules allow.

“Our volunteers are the true stars of the Lutcher Theater,” said Lynae Sanford, executive director. “We couldn’t bring the caliber of entertainment to this area without their help. The Lutcher Theater has become known in the industry for their hospitality and professionalism that the Service Guild helps provide.”

Persons interested in volunteering can choose to be involved with one or more committees that represent the different aspects of the theater’s needs. Volunteer committee opportunities include:

Annual dues for Service Guild members are $15 and are used to support Guild activities.