Orange County Disaster Rebuild will operate a Multi-Agency Resource Center (MARC) for those that have suffered major residential damage from the January 24, 2023 tornado. Access to this event is limited to Orange County Residents only.

Attendees will need to self-report through this link: https://damage.tdem.texas.gov/ prior to registration for the MARC. Damage reports are NOT a guarantee for assistance and will be verified.

Once the self-report survey has been completed, click on this link to register for the MARC.

Registration for this event is REQUIRED. The event address will be provided upon Registration. One submission per affected address, please.

Approved participants will need to bring a photo ID and proof of address. In-person registration will NOT be permitted. 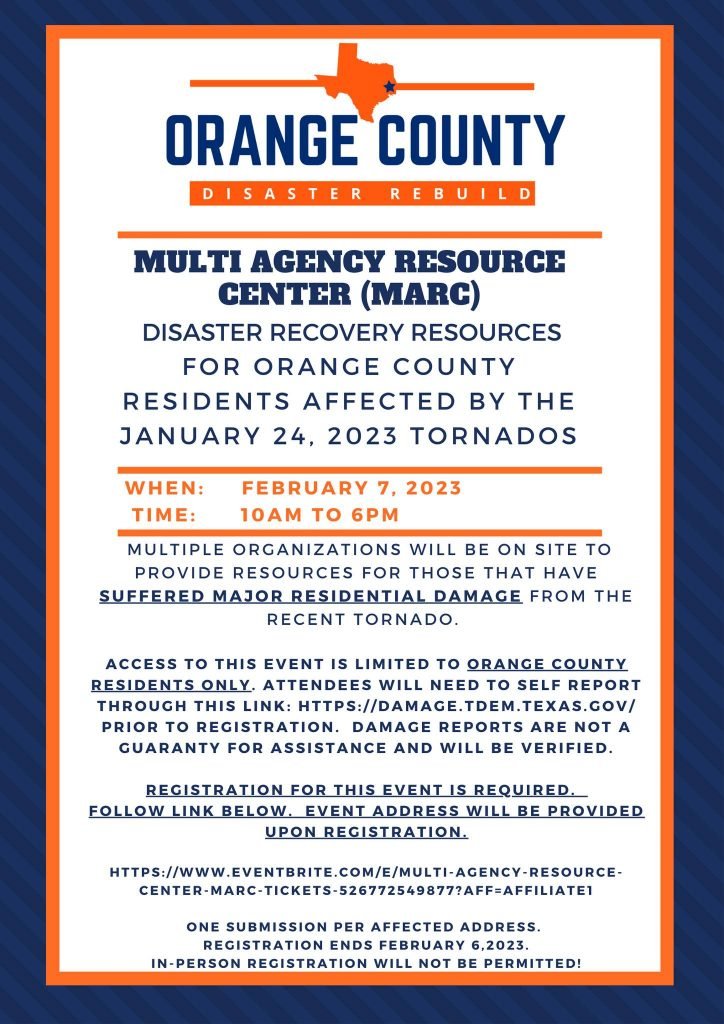 The vegetative/green waste should be cut into 10 feet or fewer pieces. Place the debris to the side of the road in a manner that is not blocking the roadway in any way. The debris should be accessible for pickup with a grappling truck.

The Road and Bridge Department employees are only allowed to get what they can reach from the road with their equipment. They are not allowed to go on private property. It is recommended that homeowners take pictures of debris that is placed curbside for pickup to ensure proper documentation.

It is further recommended each homeowner verify with their insurance carrier any other additional documentation requirement they may have.

The Orange County Citizen Collection Station, 11265 FM 1442 in Orange, is open to receive demolition/construction debris from homeowners. The fees will be waived for these residents. The hours of operation are Saturdays and Sundays from 7 a.m. to 5 p.m. and Monday through Friday from 7 a.m. to 6 p.m. These extended hours will last for two weeks.

Building permits are required for rebuilding from tornado damage and can be obtained at the Environmental Health and Code Compliance Department in the Expo Center at 11475 FM 1442 in Orange. The permit fees will be waived for homeowners only. If the damaged structure is located in a special flood hazard area, an elevation certificate is required.

The iSTAT damage survey can be filled out online at damage.tdem.texas.gov.

If you are having trouble entering your information, Orange County Disaster Rebuild will be offering in-person assistance to help families enter their damaged information into iSTAT starting Monday, January 30, 2023, located at the Orange County Convention & Expo Center;11475 FM 1442; Orange, Texas 77630 from 8 am to 5 pm.

The information provided by you will aid emergency management officials in gaining an understanding of damages that have occurred and helps officials determine if the state meets federal requirements for various forms of disaster assistance, as well as identify any immediate resource needs. 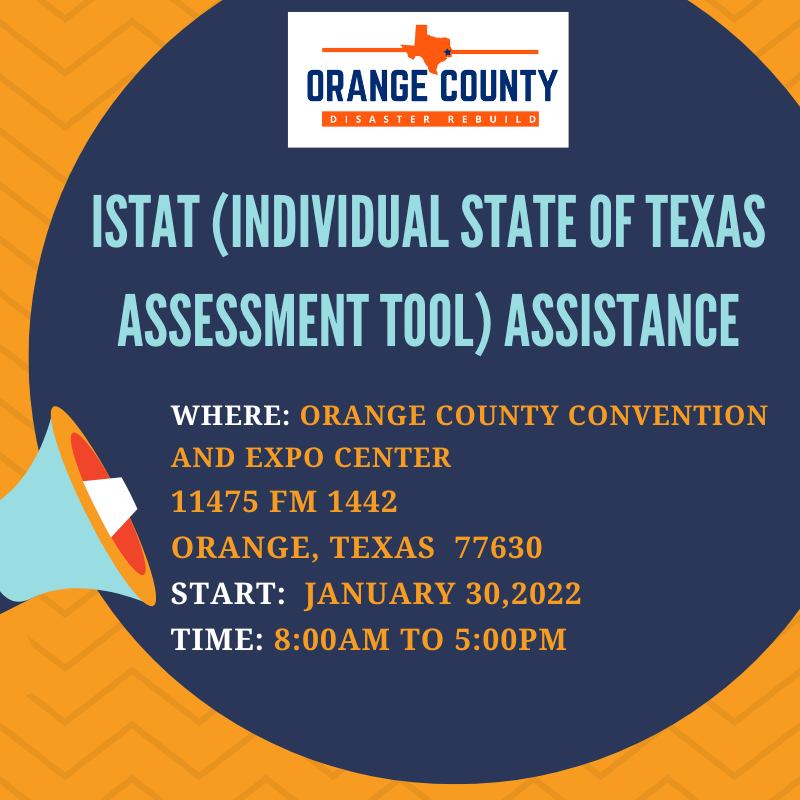 He notes that it will take days to get a full picture of the destruction, adding, “From impacted to destroyed homes, there are different levels of that, but there are about a 100 homes, but we’re going to go back out to finish up that assessment tomorrow,” Ardoin said.

Ardoin says there were no deaths and only two injuries. One person had some cuts, and another had a head injury.

According to National Weather Service Lake Charles, the tornado that hit Orange County was one of three that went through Southeast Texas on Tuesday.

Meteorologist Chanelle Stigger noted that all the tornadoes were from a line of thunderstorms that moved through. She added,  “However, it wasn’t, more than likely, the same one that picked up and touched down. More than likely, what we’re looking at is three separate tornadoes. We won’t be able to actually determine that until the storm survey is completed.”

One of the tornadoes started in Liberty County and moved into Jefferson County between Nome and China, according to National Weather Service Hydrologist Jonathan Brazzell.

The second tornado started in Big Hill and moved northeast through Taylor Landing, and headed just north between Taylor and Hillebrandt bayous.

The last tornado started just north of Bessie Heights and then crossed Orangefield into the Weiss Bluff before moving over the Sabine River into Starks and Vinton, Louisiana.

“Right now, our best guess in Southeast Texas is we had three (tornadoes),” Brazzell said. “That’s not to say there couldn’t have been more.”

Brazzell said the three tornadoes were identified using the storm radar and debris patterns. However, storm damage teams may be able to detect more when out in the field looking at the damage.