The Southeast Texas Coaches Association has named its coaches of the year.  The list is noted below.

The 2022 Coach of the Year awards will be presented during the CHRISTUS and Beaumont Bone and Joint Hall of Honor Banquet that will be held on January 28, 2023,at noon in the Grand Ballroom of the MCM Elegante in Beaumont.  Tickets can be purchased at the door for $20. 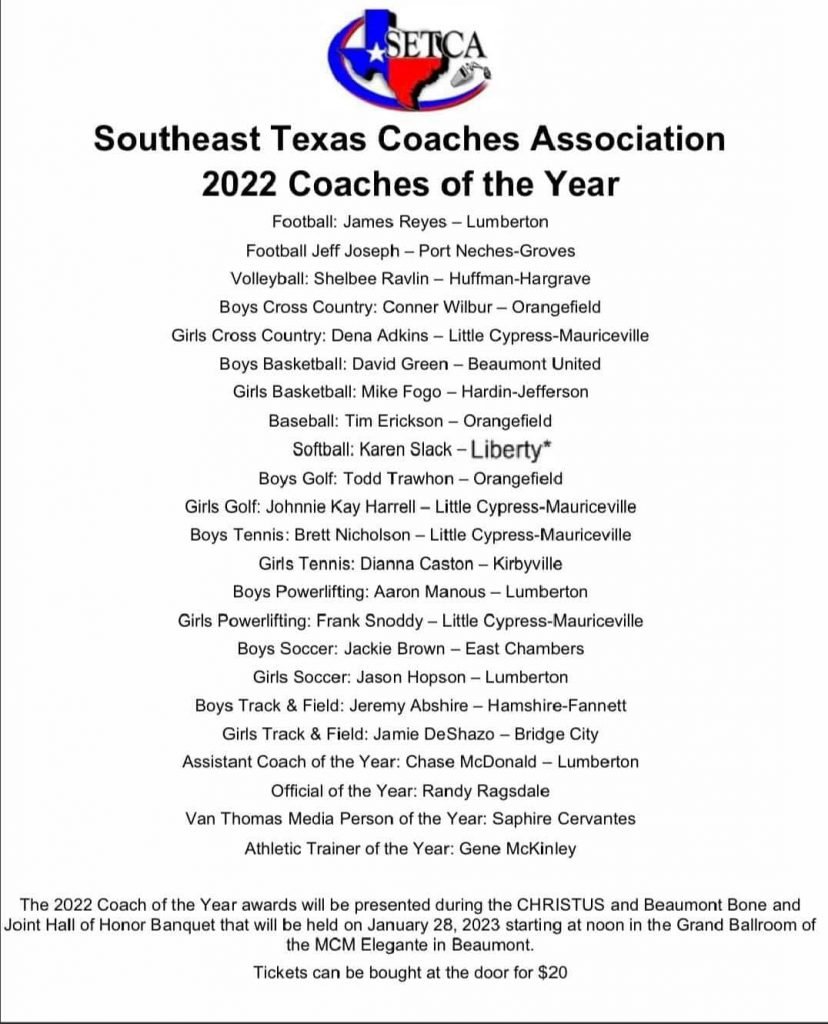 West Orange – Cove Consolidated Independent School District is proud to announce that during the March 28, 2022, board meeting, the WOCCISD Board of Trustees approved the naming of the baseball field, Andre Robertson Field.

The park will remain Ronnie Anderson Park, and the playing field will be named Andre Robertson Field.

Andre Robertson’s list of accomplishments is extremely impressive; here are a few highlights:

Mr. Robertson was the first African American to play little league baseball at “Memorial Field” in Orange, TX. He was a multi-sport star and played varsity baseball for West Orange High School, where he led the team to the state final for the first time in school history.

Andre was also a 3-time All-State player. In addition, he was the first African American to earn a FULL baseball scholarship to the University of Texas in Austin. He went on to play with the Toronto Blue Jays and for the New York Yankees in the 1981 World Series

West Orange-Cove CISD is excited to announce that the board of trustees approved Hiawatha Hickman as the Mustang’s next Athletic Director/Head Football Coach during the Monday night meeting.

Hickman began working for the district in 2016 and has taught and coached for WOS for over six years; he collectively brings 22 years of teaching and coaching experience to the position. He is enthusiastic about the opportunity to impact students and the community on a larger scale as he takes on his new role. Hickman says, ” I am honored to be offered this special opportunity to lead the Mustangs’ athletic program.”

The district shares Hickman’s enthusiasm. Superintendent Dr. Rickie Harris stated, “The district is focused on putting the right people in the right places to best serve our students. Hiawatha Hickman will be an outstanding leader for our Athletic Department. Our goal is to replace a legend (Coach Thompson) with someone who has high character, respectful, and can serve as an excellent role model for all students; Hickman checks all those boxes.”

The timeline to take on the role full-time will go as follows:

February 7- June 30, 2022, Hickman will transition from Assistant Principal to active AD in the absence of Coach Cornel Thompson.

Little Cypress-Mauriceville Athletic Director and Head Football Coach Randy Crouch has announced his intentions to retire at the end of the 2020-2021 school year. According to Crouch, “After playing or coaching for 55 years, it’s time. I want to thank Little Cypress-Mauriceville for the opportunity to be the AD and Head Coach for the past twelve years and for the four years I spent as an Assistant Coach. The support here is wonderful.” He also thanked LCM Superintendent Stacey Brister for the leadership that she has provided and is also appreciative of Dr. Pauline Hargrove, who is the retired Superintendent who hired him. Crouch also wants to recognize his wife, Dewanna, who has been so supportive through the years.

Coach Crouch was an Assistant Coach with LCM from 1994-1998, prior to going to WOS as Offensive Line Coach with the Mustangs. He returned to LCM in 2008 as Athletic Director and Head Football Coach for the Battlin’ Bears. “The older you get, you realize how important it is to impact students in the right way, and LCM is great at that,” he said. “I do hope that I am leaving the program better than it was when I got here.” Bears have made the playoffs six of those twelve years under the leadership of Coach Crouch.

Randy Crouch has had numerous awards and recognitions through the years, including being named Coach of the Year by the Southeast Texas Coaches Association. He was also named to the Bulldog Football All-Century Team in August of 2001, honoring the 50 greatest players from the first 100 years of Louisiana Tech football and the 50th Anniversary team along with Terry Bradshaw, Roger Carr, John Causey, and other notable standouts.

Superintendent Stacey Brister had this to say about him. “Coach Crouch has made a tremendous impact on our students, staff, and the community throughout the years. I appreciate all that he has given to our District to better our athletic programs. He has been an outstanding role model for our students and coaching staff. We will miss him and wish him the very best in his retirement.”

The highlights of the plan are below.