In an effort to increase the accessibility of high school football games and encourage social distancing across Texas, the UIL will allow live telecasts of regular season football games on Friday nights during the 2020-2021 school year.

Orangefield ISD is partnering with Texan Live to have all of their home games streamed for their fans’ convenience. Texan Live will be working with a number of schools in the area, so there may be a chance that they will cover some of our away games as well.

There is a monthly subscription that goes along with the service. The monthly fee is roughly $10. If you subscribe for three months it will equal the cost of what season tickets would have cost during a normal season.

To get your subscription, visit https://www.texanlive.com/subscribe/

B.A.S.S. officials have announced the schedule for the 2020 Bassmaster Elite Series, a nine-tournament slate that will take the world’s best bass anglers to six states and some of the most storied fisheries in the sport’s history.

For fans who love watching professional anglers catch giant bass, the schedule is likely to be love at first sight.

“This year, we unveiled the mantra ‘Big Bass. Big Stage. Big Dreams.,’” said B.A.S.S. CEO Bruce Akin. “We’ve certainly delivered on that in 2019 — and with the schedule we’ve put together for 2020, we’re ready to take another giant step on that path.

“Fans will have an opportunity to see our anglers compete on some of the best big-bass lakes in America.”

The sixth event on the schedule is known for producing some of the biggest crowds in B.A.S.S. history — the Sabine River in Orange, Texas. The fifth Elite Series event on the 2020 slate will be held at Orange on May 29-June 1 and could challenge the Elite Series fan attendance record of 36,200.

It’ll be the fourth time the Elite Series has visited the Sabine River system — and in three previous visits, the crowds totaled more than 96,000.

For earlier events at the Sabine River, catch rates were somewhat low. But the Texas Parks & Wildlife Department has worked tirelessly to create a zone that is good for both the Orange, Texas, area and anglers. Thanks to those efforts by TPWD, tournament waters for the 2020 event will be expanded to include that new five-county zone.

“The Greater Orange Area Chamber of Commerce is excited to partner with B.A.S.S. to bring the Bassmaster Elite Series to Orange County once again,” said Ida Schossow, president of the Greater Orange Area Chamber of Commerce. “This tournament has brought Orange County waterways to the forefront in the fishing world. The tournament is an economic boost to our community and creates a sense of pride for our citizens.”

The full schedule can be viewed here.

West Orange-Stark’s Project Safe Graduation will be hosting a golf tournament as one of their fundraisers. It will be held Aug. 17 at the Babe Zaharias Golf Course in Port Arthur at 3500 Jimmy Johnson Blvd. Registration begins at 7:30 a.m. with a shotgun start at 8:30 a.m. It will be a four-man scramble “best ball.” The cost is $60 per person. Links, chips, and drinks will be available. 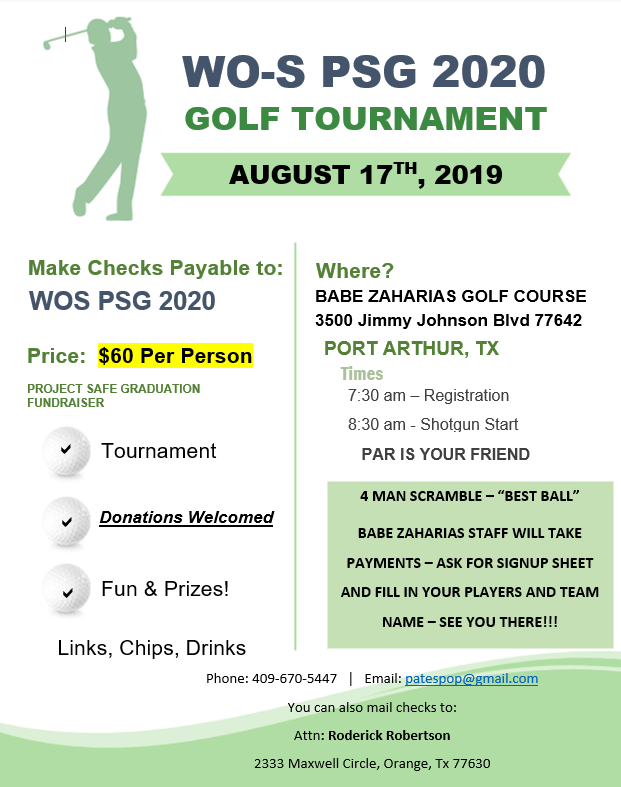 Current West Orange-Stark season ticket holders can purchase their 2019 football tickets during a two-day sale July 30-31 from 9 a.m.-noon and 1 p.m.-3 p.m. Tickets can be purchased at the Athletic Office at West Orange-Stark High School.

The football schedule can be viewed here.

The Orangefield football program will host a football camp for all incoming 2nd-9th graders July 29th-31st. The camp will start at 9:00 am and finish at 11:30 am. Registration will begin at 8:30 am in the JH gym and the camp will be conducted on the football practice field. Cost is $50 per child. Any questions can be emailed to mscales@orangefieldisd.net or jsmalley@orangefieldisd.net