On Friday, March 4, 2022, the Orange Lions Club held a ribbon-cutting to unveil Orange’s first mural. The mural, located at 701 W. Division Avenue on the side of the Orange Stationer’s building, was designed by local artist Lauren Lee.

The project was a collaborative effort between the Orange Lions Club with the Orange County EDC, Orange Stationer owners Paul and Kim Dickerson, and Lauren Leigh.

Chris Kovatch with the Orange Lions Club was the genesis of the idea of the mural after seeing Lee’s artwork throughout Orange on the windows of multiple businesses and on the concrete oranges the Chamber sells to businesses. So he contacted her with the idea of painting a large mural. The project was a partnership between Leigh, the Dickersons (owners of Orange Stationers), and the Lions Club. The Orange Lions Club worked with the Orange County Economic Development Corporation to obtain funds via a HOT (Hotel Occupancy Tax) grant, Dickerson donated the space, and Leigh painted the project.

The top half of the mural depicts an orange rising over the Sabine River, with the skyline in the background. The lower half is the Sabine, complete with a hooked bass coming out of the water. The mural continues onto the sidewalk as a fully immersive design. The sidewalk has been painted as a fishing dock.

Citizens and visitors are encouraged to explore downtown Orange and complete their visit with a picture at this spectacular mural, located at 701 W. Division Avenue. 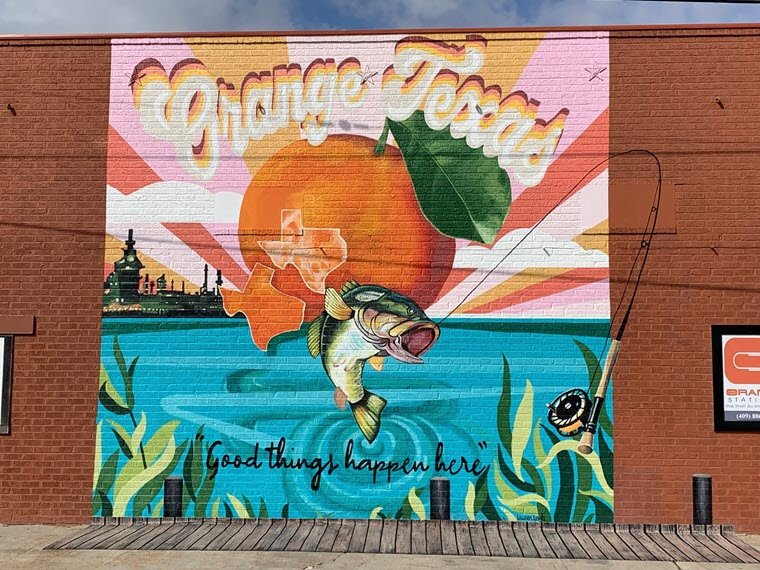