Beaumont Elks Lodge #311 is happy to announce that it has delivered a grant of $3,500 to the Beaumont Chapter of Sleep In Heavenly Peace (SHP), a 501-c-3 non-profit organization.

Also present were representatives from the Fraternal Order of Eagles Port Neches Ladies Auxiliary, with their donation of 32 sets of bedding for use on the beds to be made at the next “Build Day” event for SHP. Pictured are Lisa Smith, Betty Perkins, Tonya Sandifer, and Cathy Nichols.

One of twenty SHP chapters in Texas, the Beaumont Chapter serves the SETX counties of Orange, Jefferson, and Hardin, as well as the communities of Devers and Orange. Unfortunately, they are far less known than they should be, as is the community they serve.

One in five people in Southeast Texas lives below the poverty level. About one in ten struggles to make ends meet with less than half of the federal poverty level of income. It is difficult to find the actual statistics, but too many boys and girls go without a bed or even a pillow to sleep on because their families cannot afford one. These children end up sleeping on couches, blankets, and even floors. This can affect their health as well as their happiness.

Sleep in Heavenly Peace is a group of volunteers in Beaumont dedicated to building, assembling, and delivering sturdy, utility-grade twin-size beds AT NO CHARGE to children aged 3-17 in need. They are a chapter of a national non-profit charity, started in 2012 in Idaho. They work entirely on donations and with volunteers. As of December 2022, there are SHP 350 Chapters across US and Canada.

The Beaumont group has built and delivered more than 2000 beds. Their current waiting list is 271 beds for Jefferson, Orange, and Hardin counties! That’s a lot of kids sleeping on the floor.

This group is such a secret that even our local CASA (Court Appointed Special Advocates) was unaware of it until we, the Elks, introduced them a few years back. CASA’s need? They have potential foster parents for kids that can’t qualify because they don’t have an extra bed for the foster child. Now that’s really sad.

The cost for materials for a single bed is now about $250, and $500 for a bunk set. This includes a mattress and bedclothes. These costs have increased 100% in the last year due to the cost of lumber. Just the mattress alone costs around $100.

The Elks’ grant of $3,500 was donated to Sleep In Heavenly Peace to fund the purchase of materials to construct beds.

A Gratitude Grant of $2,500, funded by the Elks National Foundation, was combined with a direct contribution from Beaumont Elks Lodge #311 fundraising activities in the amount of $1,000.

The Beaumont Elks Lodge #311 is proud to carry on its charitable work for children and veterans in Southeast Texas.

This Christmas giveaway is OPEN to ALL RESIDENTS of Orange and Jefferson Counties! Recipients must possess the following to receive gifting:

This year they are anticipating a high volume of traffic so they ask that everyone adhere to the posted traffic advisories that will be posted in days to come.

If your business or organization wishes to partner with their efforts, please notify Community180 through Messenger on their Facebook page or make your donation via Cashapp at $LoveCommunity180 with a memo “FOR CHRISTMAS”.

This is a while-supply-lasts event, so first come, first served.

Community180 Outreach is a Houston-based organization whose mission is to help others make the right turn. Through their programs that focus on community development, they work to give the next generation a chance to experience a bright future. 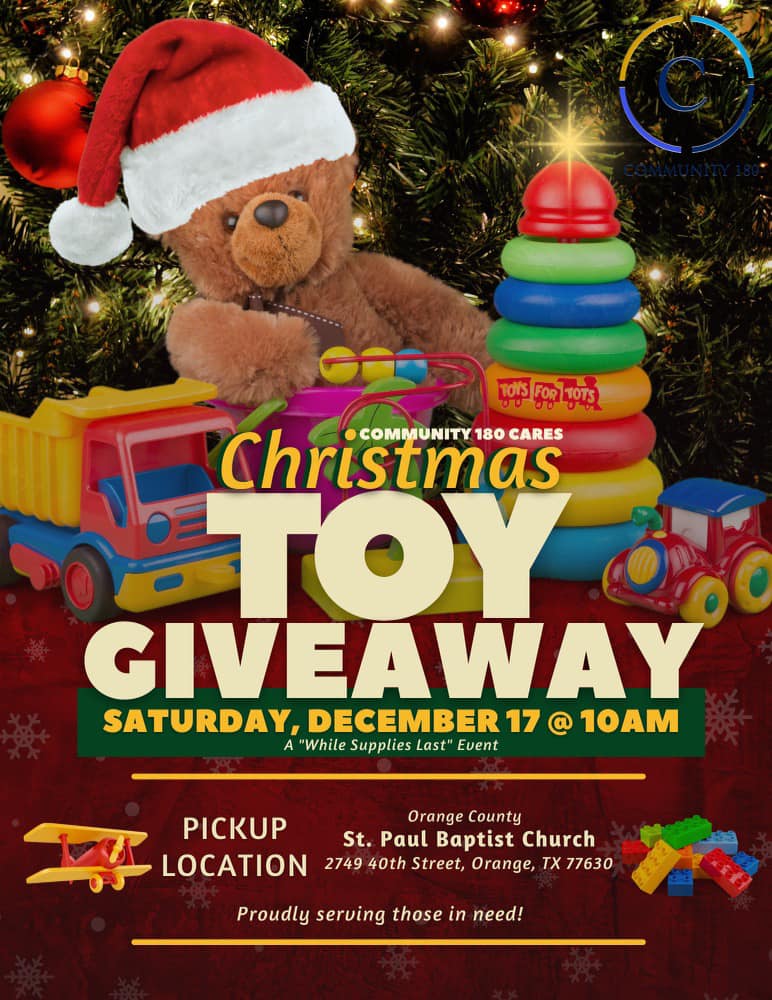 Orange County Meals on Wheels will be hosting a “Chip In” event to help seniors in Orange county on Friday, December 9, 2022, from 11 AM -1 PM.

They will be selling a chipped beef sandwich, chips, a drink, and a cookie for just $10 at 103 North 5th St. in Orange.

Director Kristin Burman notes, “We’re asking for the public’s help, Food prices have gone way up, but our budget has not.”

Meals on Wheels feeds some 500 seniors daily throughout Orange County. For many of the seniors, it is the only interaction they have with another person all day. 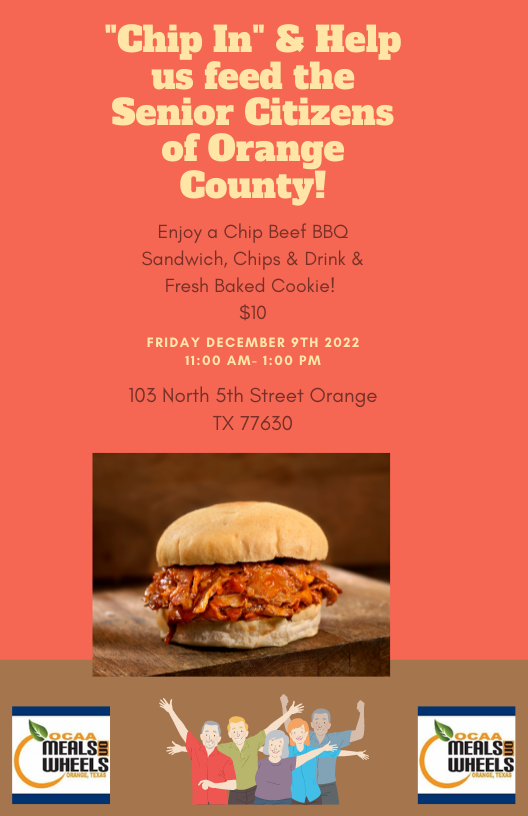 Heritage House Museum will hold a grand re-opening and ribbon cutting on December 7, 2022, at 4 pm. This free family event lets visitors explore the house through the eyes of the Victorian era. 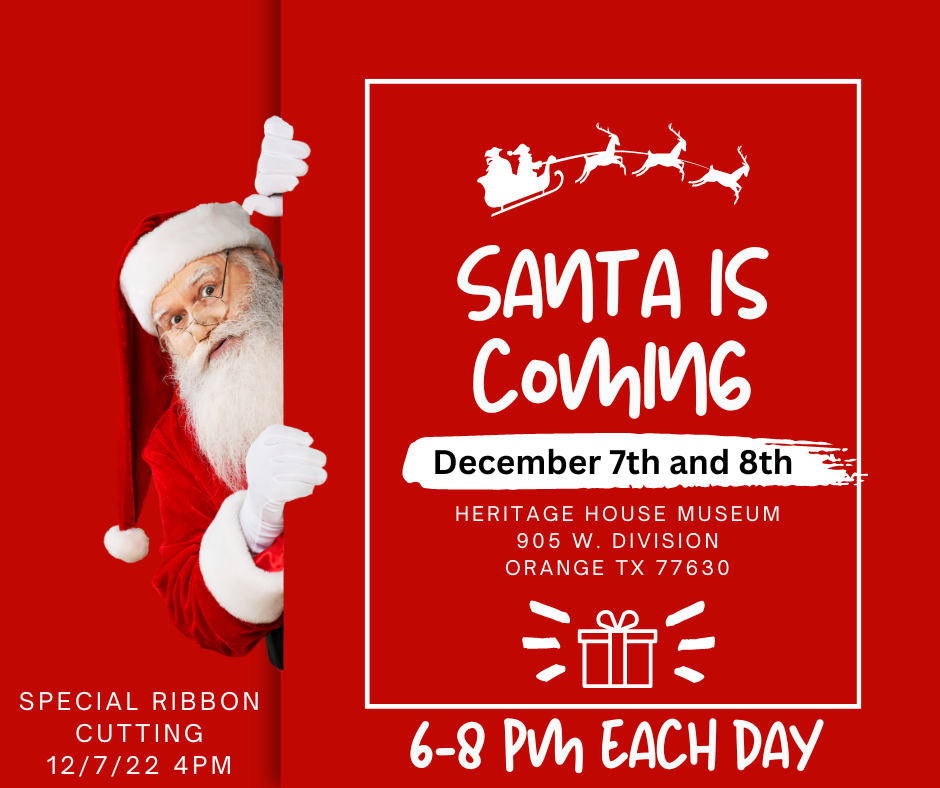 The Kiwanis Club of Orange TX will be hosting two major Christmas events this weekend. 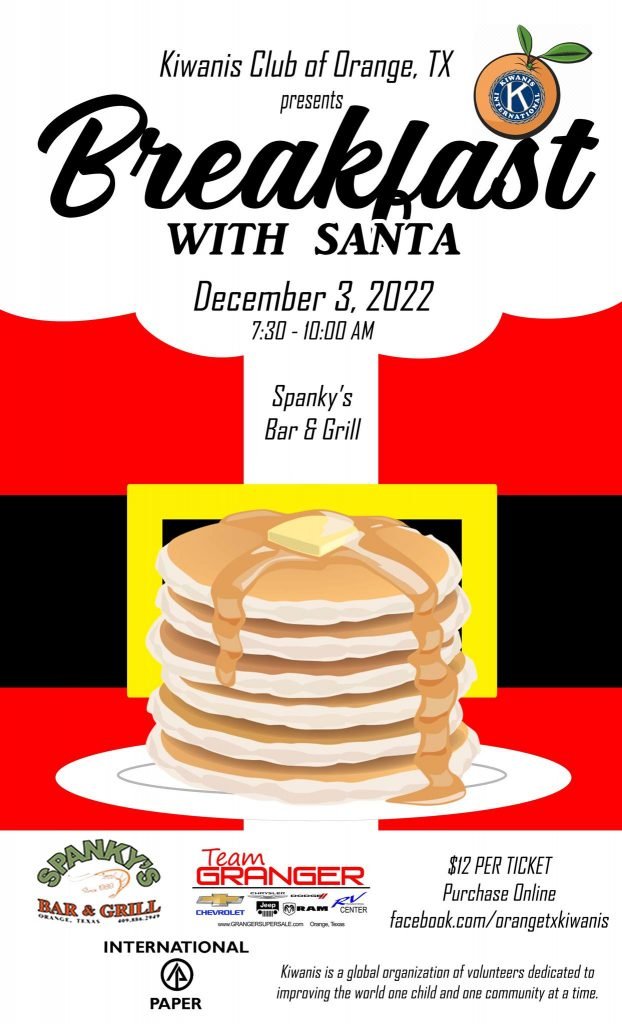 Following the breakfast later in the day is their 73rd Annual Christmas Parade on Saturday, December 3, 2022, at 6 PM. The theme is “Through the Decades.”

There will be a Quiet Zone at the beginning of the parade route with no sirens or flashing lights to allow children and adults who may be sensitive to light and noise to enjoy the parade.

The parade route is in the graphic below. 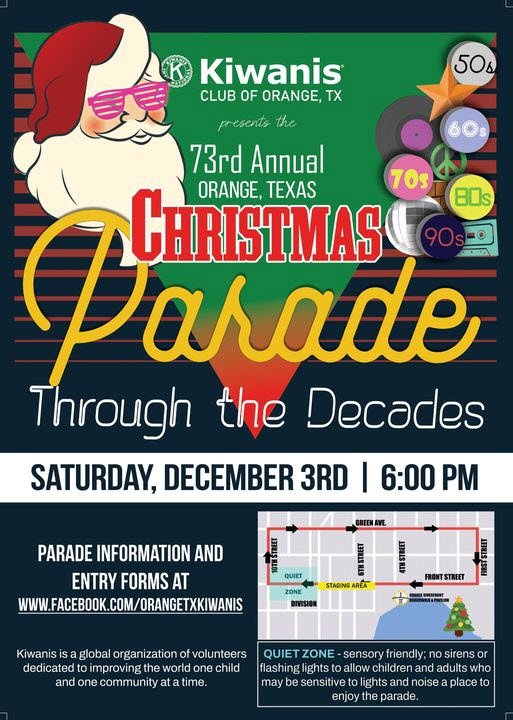