These funds are desperately needed in these communities, which were severely damaged by Hurricane Harvey. It is unfortunate that there is such a gap between the occurrence of the natural disaster and the allocation of the funding. With all of the technology available to government, businesses, and individuals, I’m not sure why there is about a two-year gap between the disaster and funding appropriation unless the traditional excuse of government red-tape is the culprit. There must be a better way to bridge that gap to get funding into needy communities in a more timely fashion.

Back to School Orange County will be held on Saturday, August 3 from 9 A.M. to 12 P.M. at Lamar State College-Orange Student Center. This event provides school supplies and immunizations on a first-come, first-serve basis. All parents or legal guardians must be present with children and must bring proof of the child’s enrollment in an Orange County school such as a student id, report card, or letter from the school. 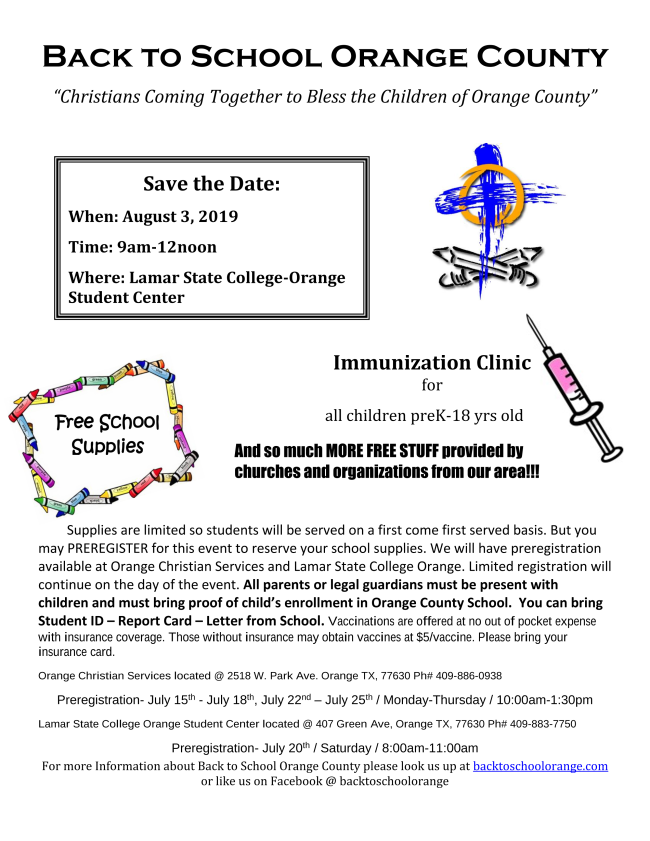 Last week, the TSUS Board of Regents voted unanimously to reduce tuition and fees at the Lamar State Colleges by an average of 25 percent. Starting this fall, full-time students will pay standard tuition and fees of $1,995 at all three colleges – roughly the same price as in 2009. The board also reduced the fee for dual credit courses from $75-$110 per semester credit hour to $50 per semester credit hour at all three colleges.

Although their mission is similar to the state’s community colleges, the Lamar State Colleges receive no local tax revenue, resulting in an overdependence on tuition and fees. Last year, tuition and fees at the Lamar State Colleges were about $1,800 higher, on average, than Texas community colleges. Now, the cost difference is roughly half that amount.

“The Texas Legislature and Governor Abbott deserve enormous praise for creating a more level playing field for college students in Southeast Texas,” said TSUS Chancellor Brian McCall. “Cost should not be a barrier to a college degree if we have the means to address it. This additional funding shows a strong commitment by our state leaders to the students of Southeast Texas.”

The full news release can be found here.

West Orange – Cove CISD Child Nutrition Services is providing breakfast and lunch for free Monday through Thursday to all children 18 and under through the Summer Feeding Program. Meals are available at WOS Elementary through August 8. Breakfast is served from 8 – 8:30 a.m. and lunch is served from 11 a.m. to noon. Meals are served regardless of enrollment and financial status. 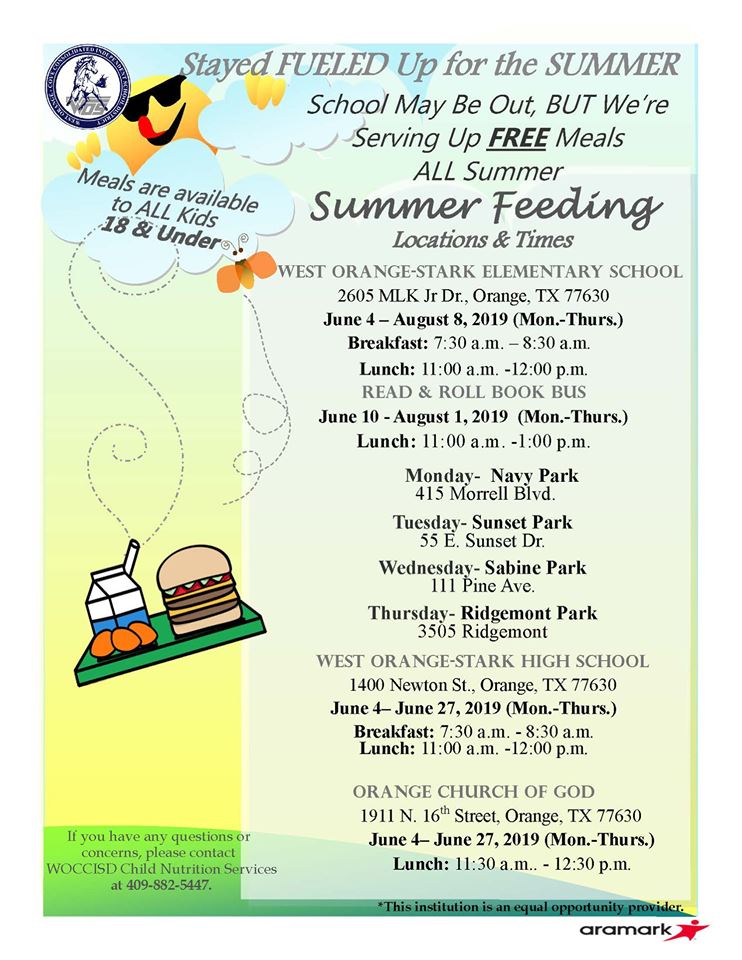 Free lunch and books are also available for students through the Mustang Read and Roll Book Bus program. The Mustang Blue Activity Bus stops for lunch service and book time from 11 a.m. to 1 p.m. on dedicated weekdays at these locations:

Check to see what your child needs for school supplies from Pre-K through eighth grade.