The Big Boy 4014 steam engine train will be making stops in West Orange on Thursday, August 19, 2021. The  West Orange top will be around 9:30 am Thursday at Holly Lane Crossing and South Avenue before proceeding on to Lake Charles.

Temporary parking will be available at McDonald Baptist Church at the corner of Broad St. and South Avenue.

During World War II Union Pacific operated some of the most modern and powerful steam locomotives ever built. Among them were the famous “Big Boys,” the largest steam locomotives in the world. Working with them were the “800-class” high-speed passenger locomotives, as well as hundreds of older class steam engines. Union Pacific’s steam legacy continues today with the preservation and operation of its historic fleet – No. 844 and No. 4014.

The public is encouraged to attend, and city officials will be on hand for this special occasion. 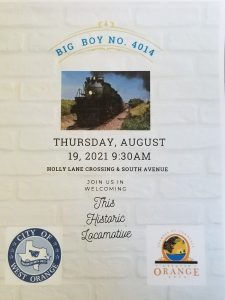 Summer Reading Programs kick off soon at the Orange Public Library. The…

The City of Orange Convention & Visitors Bureau and the Deep South…